I’m amazed. I don’t know what’s the most important factor, but I feel SOO good right now. It might be the fact that I’ve just had a nice hot shower. It might be that I’m in bed without thermal underwear, a hat and a scarf. It might be because I’m not at an altitude where walking up a flight of stairs makes me struggle for breath. It might be for any number of reasons, but I feel great! 🙂 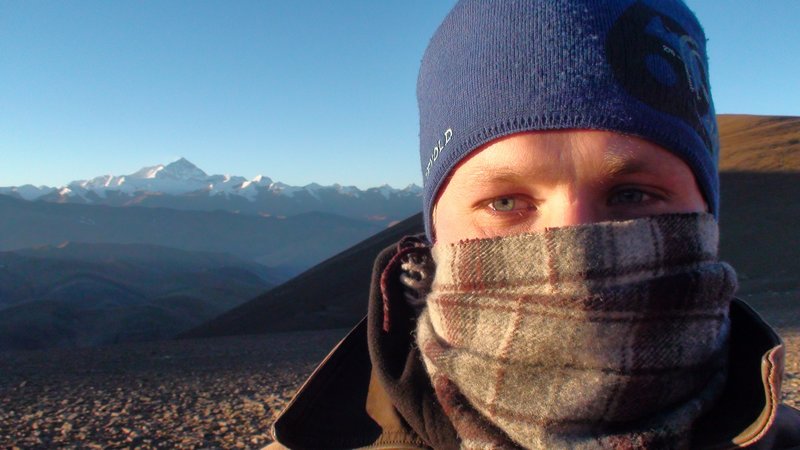 The last three days I’ve travelled quite far, on a very scenic route. I’ve been to altitudes as high as 5220 meters above sea level and I’ve slept at altitudes over 4000 meters. I’ve realized that the colour symbolism of Tibetan art isn’t as weird as it seemed as first. Blue stands for the sky: Obvious. Red is for fire: Also normal. Orange is for earth: Actually true, most of the time! Green is for water: Astoundingly, almost always so! All art in Tibet uses these three, plus white, which seems to be the colour of the gods, and black which is the colour of the demons. 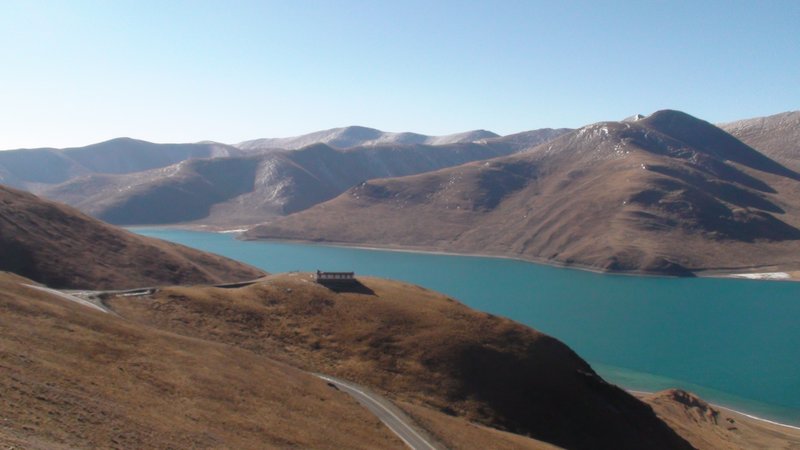 I left Lhasa on Tuesday, early in the morning, with Gabrielle and Christopher from the US. We took the roundabout route to Shigatse / Rigaze / Xigaze, via Yamdrok Lake. The lake is more than 4000 meters above sea level, and the most brilliantly azure green imaginable. It’s one of the holy lakes of Tibet, it has holy Lama Ducks (feathers the same orange as the Lamas’ robes) floating around on it, and there’s holy fish living there… We stopped in Gyatse, and took in the old temple there. It had been badly burnt and damaged in the cultural revolution, and the monks were not allowed to restore it, but they were at least allowed to use it. There were old prayer books that were burnt at the edges, the paintings on the walls were nearly invisible due to their burnt state, but still it had a feeling of authenticity that the well kept and restored temples in Lhasa didn’t. In Shigatse we stayed in a hotel with two stars on the official Chinese rating. I can’t imagine what one star is like, because there was no running hot water, no heating (so somewhere around -15 degrees in the room, I guess), no toilet paper, no soap, the floor was filthy, and the bedsheets weren’t clean. We asked for clean sheets, and the attendant came with new sheets, neatly folded, that looked even dirtier than the ones already on the beds, but at least didn’t smell like sweat and yak butter.

Yesterday, we started by walking around the main monastery of Shigatse for a couple of hours. It was a great place, that seemed a lot older than the ones in Lhasa, but in a better state of repair than the one in Gyatse. Another good thing was that there were no Chinese military presence inside the monastery. In Shigatse we also got our Travel permits, which allows us to travel outside of the two big cities of Lhasa and Shigatse. At this point they told me that my Chinese visa was NOT valid until Jan 10, but Jan 9! (December has 31 days, I had a 30 day visa, I entered on Dec 11, hence I assumed it was valid till Jan 10. Not so, apparently) This meant that we must leave Tibet a day earlier than planned, even though we’ve already paid for the last day. We still got the permits we needed and got going. We were going to stay at Rongpu Monastery, 7 kilometers from Mount Qomolangma (Everest) Base Camp that night, but that’s at very high altitude, and therefore very cold, so our driver was sure the car wouldn’t start again if we stayed the night there, so instead we stayed over at a hotel in a small town right outside of Qomolangma National Park, called Shegar. The prices were that of a hotel, but this was more like a guest house than hotel. There was no running water, hot or cold, no heat, the toilet was a hole in the floor onto a big pile underneath, the room was probably around -20 degrees, and absolutely filthy. I liked it a lot better than the one in Shegatse, however, as it was quite quaint and rustic, and had a heated common room where the locals came to drink tea and gamble at Mah Jong! We got our Mount Qomolangma National Park Permits, which were 180 NOK per person, plus 400 for the car. 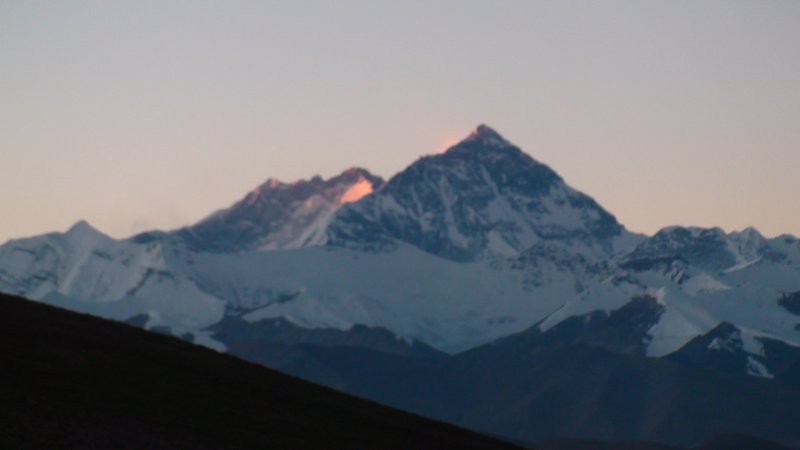 This morning we left while it was still dark, and went through two military checkpoints before we got to enter the National park. One checked our passports and travel permits, and the other checked our National park permits. We saw the sun rise over the Himalayas from the Pang La pass, 5110 meters above sea level, from which we could see four of Tibet’s five mountains over 8000 meters! We had our breakfast noodles in a village on the other side of the pass, and then went through yet another military checkpoint before we started the climb to Rongpu. At Rongpu we met a frozen river that crossed the road. There was so much ice that it was impossible to get any closer to Base Camp, so we had to turn around, a measly seven kilometers from the first Base Camp. (There are three, at increasingly higher altitude, with exponentially increasing entry fees. To climb the actual mountain costs, according to Gabrielle and Chris, 50 000 American Dollars from the Nepal side, and is definately no cheaper from the Tibetan side…) We still had a marvellous view of the world’s highest peak, and left there only slightly disappointed. After the 97 kilometers of bumpy, dusty gravel road, with hundreds of switchbacks to climb the marvellous passes, back through two of the three checkpoints, the first part of which we had a monk hitch hiker with us, and the second part a soldier from one of the checkpoints, we met a French guy which we were told were to travel with us to the border. He had paid for a land cruiser for himself all the way to the border and we had paid for ours, so he called the agent and said that he’d agree to it if he got half his money back, and we said we’d agree to it if he split the cost of our car for the last leg of the journey. He ended up not going with us, but he was leaving Tibet on the same day as us, so we might meet him again at the border tomorrow…
When we got to the town of Dingri / Tingri, we wanted to stay the night there, to get the last leg of the journey to the Nepalese border in daylight. Then we were suddenly told that people leaving the country on the last day of their visa (which, for some reason is Jan 9 for me) have to leave before 10 am… Which meant, we had to go on to Zangmu, the Tibetan border town. 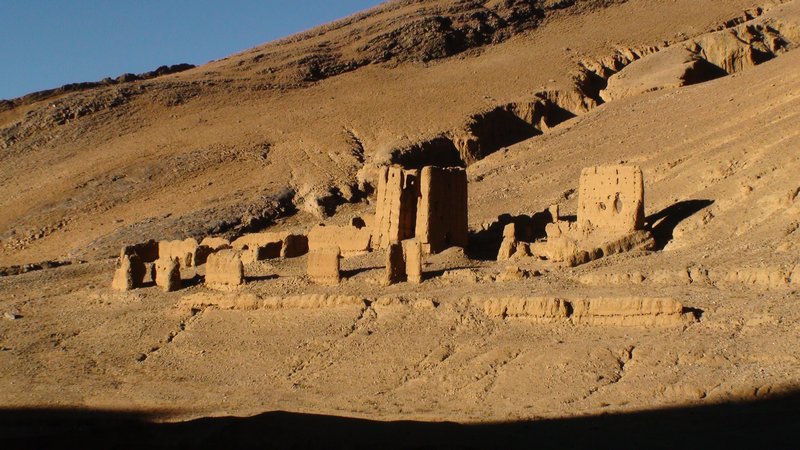 We had a gorgeous ride, through a valley scattered about with ruins of old Tibetan fortresses and monasteries, walled by mountains in the most amazing shades of bright red, through brown, orange and yellow, to soot black. We crossed two passes over 5000 meters, before ascending into the valley where the town of Zangmu is clinging to the hillside next to the Nepalese border, only a couple of thousand meters above sea level. It was dark when we went down the valley to get here, which was a pity, because it was the steepest, scariest zig zag road carved into the almost vertical sides of the Himalayan mountains, and it would’ve probably made for some great pictures in daylight. In the light of the almost full moon, however, it got a quite eerie feeling, which was also really cool! It’s now past 1:30 am, and I’m getting up at 8:30, so I’m going to try to get some sleep.