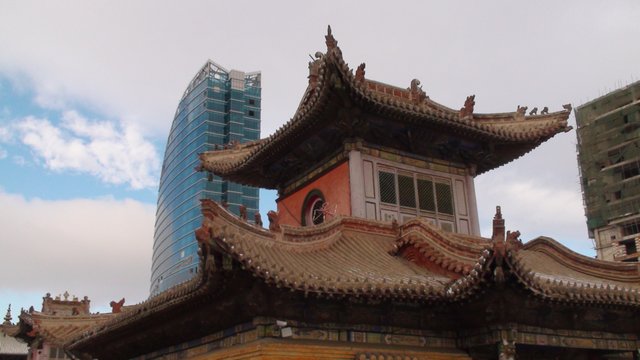 The past few days I’ve explored UB at a rather leisurely pace. I reunited with Michiel and Rick from Holland. We met in a CS meeting in Irkutsk, and had a day trip to Lake Baikal together the next day. When I left for UB, they stayed on for another day in Irkutsk, and then went to Ulan Ude before they too continued on to UB. Michiel is a Buddhist, and is  staying in Mongolia for a month, to do volunteer work. He’s working at a soup kitchen, helping set up a play with local orphans and street kids, and making a short promotional video for the buddhist centre he works at.

In UB, I’ve been to the National Museum of Mongolian history, and the Mongolian Museum of Natural History, which among other things has a quite good collection of dinosaur bones. An old man I met at a restaurant took me to an art workshop funded by the state, where many of the great artists of Mongolia do their work. His son is an artist there, and he showed me how he worked, and I got to look in an album with pictures of his work. I assume he must be rather well known, because I recognized quite a few of his pieces from various places around Ulan Bator!

I’ve also been to the Monastery Museum of Choijin Lama, the Winter palace of Bogd Khan, and to the Zaisan Memorial, a Soviet phallus of a monument in honour of unnamed soldiers in various wars. On Sunday I got up early, and went to Gandan Khiid, and witnessed the morning ceremonies of the Buddhist monks there. It was a pretty fascinationg affair, with the monks chanting different texts at different pitches, and all of it mixing together into a cacaphony which was sometimes emphasized by frantic blowing in horns, ringing of bells and banging on drums. Some of the layity also took part in the ceremonies, by holding some of the religious objects used in various rituals.

On Sunday afternoon, I met with a Norwegian couple and their three kids. The couple have lived in UB since 1994, and the kids grew up there. They work for a Norwegian mission, with local economic development. A few weeks ago, the Norwegian Crown Prince Haakon was on an official visit to Mongolia, and he also paid a visit to one of their projects. We had a burger at the State Department Store, and then we went to worship service at the international interdenominational fellowship in UB. There were Christians from all 5 continents, and I got to talk to quite a few of the people there. Not all of them were foreigners, though; quite a few were Christian Mongolians who were interested in improving their English. For those who didn’t understand something from the sermon, or just wanted to talk about it, there was a small gathering after the service, where people could ask questions about everything from “what does that word mean” to deeper religious questions. It was nice to be part of a fellowship off Christians, where I even understood all that went on!

My host after I came back from the Ger camp, an outspoken and kind satanist-neo-nazi-metal-head (!) who calls himself Degi, spoke very little English, and frequently used what little he knew to proclaim things like “I hate jews,” “I hate all black people,” “kill all the Christians and burn all their churches” and similar outrageous statements. It was difficult to understand where all the hatred came from, and we had trouble connecting. One night, however, he told me about his mother, who died from stomach cancer last year. He told me that he always sided with evil, because it made him feel brave, and not fear death. He didn’t know, or couldn’t explain why, but he said that Satan lives in his heart, and makes him do it…
Last night was my last night in UB, and we were talking about everything and nothing. Suddenly he tells me that he wants to be rid of Satan’s power because he can feel him destroying him on the inside, but he was worried that Satan would retaliate if he denounced him! We talked about it for a while, and it turned out that he’d been given a new testament at the Christian hospits where his mother had spent the last of her life. She was there, because nobody else would take in a dying woman. He’d read the whole thing twice, and wanted to know whether Jesus could protect him from Satan, if he stopped being Satan’s servant. I told him that the battle was already won, that Jesus defeated the power of Satan when he rose from the dead. He was still apprehensive, but he wants to talk to someone who can help him understand more about what he’s facing. He was very sceptical of Mongolian Christians, because he’d met with a lot of judgmentalism and greed, but I promised to put him in contact with the pastor of the church I went to on Sunday. When I said that I’d pray for him if he wanted me to, he thanked me, and then didn’t want to talk about it anymore, because he thought he might start crying… To those of my readers who believe, I ask that you pray for Degi and what he’s going through.

This morning (Thursday Dec 11) I got up at 6, and I went with Degi to the restaurant where he works, in the Narantuul Hotel. There he made me a big English breakfast before I had to head to the train station. 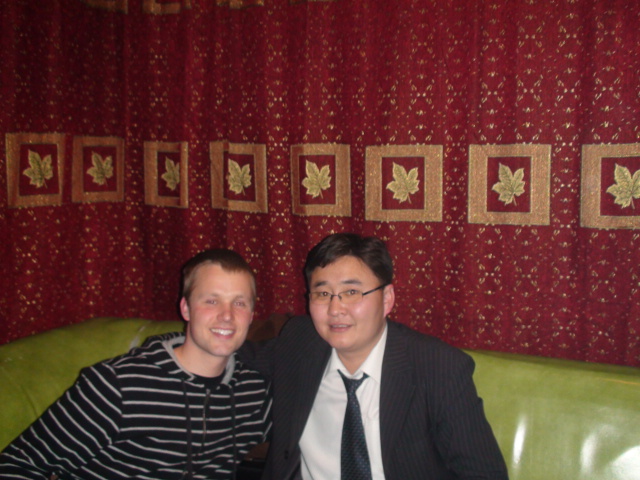 As I write this, I am sitting in the restaurant car of the train, watching the sun set over the Gobi desert. There is so much I’ve left out from the last days, like the joint Dutch/Norwegian vegetarian cooking experiment, the night in a seedy Mongolian karaoke pub, the drunk secretary of the president’s press corps who tried his darndest to get me wasted and gave me an autographed copy of his recently published collection of nomad poetry, meeting with Tsolmon, Leonid (the hitchhiker)’s web-friend, my first real blunder when it comes to crashing cultures, but if I keep writing, I guess nobody will have the stamina to read it, so this’ll have to be it for now. Tomorrow afternoon I’ll be in Beijing, where I’ll try to get this posted.

Thanks for your comments! To those still wondering how to post a comment, just press the number at the top left, under the date of the entry.