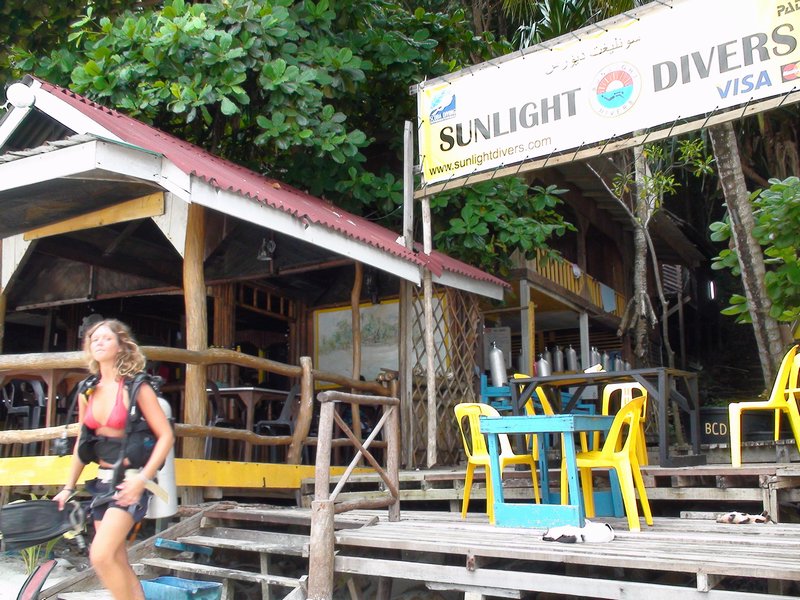 I’m back behind the counter in Sunlight Divers. This morning I went to the divesite called the Vietnamese wreck for the first time. The Vietnamese wreck is in fact an old Japanese landing vessel used to transport Vietnamese refugees, and it sank while going in for repairs. When we got to the site, the current was so strong that we had to struggle to hang on to the buoy line, and after we’d been swimming around under the upturned wreck for a few minutes, we headed out into the current again, and spent the rest of the dive drifting along the sand. 🙂 This was my first time drift diving, and also the first time I saw a seahorse! Some of my dives lately have been quite boring, watching an instructor teach skills to new divers, but it’s all part of the deal. Other dives have been REALLY cool, with lots of barracudas, sharks, stingrays, turtles, nudibranch, groupers, snappers, damsels, wrasses, lizardfish, razorfish, filefish and colourful corals. 😀

One night a few days ago some of the other staff here at Sunlight saw a nesting turtle right here on Long Beach! I wish I get to see it, and that I still had a camera, so I could film it…

I am now starting the third week of my six week course, so I’m done with the first third. I’ve got one theoretical exam to go, and one of the four stamina tests. The theory exams for the divemaster course are “Supervising Certified Divers”, “Assisting with Student Divers in Training”, “Skills and Environment”, “Physics”, “Physiology”, “Decompression Theory and the Recreational Dive Planner” and “Equipment”, and I only have the “Equipment” left to go. I’ve also had to take the Emergency First Response, since I don’t have the diploma from my Norwegian Rescue Society EFR with me. On the practical side I’m done with my Rescue Assessment, where I had to satisfactorily simulate rescuing a submerged nonresponsive, non-breathing diver, and get him to shore. I’ve also done my my 400 meter timed swim, my 800 meter timed snorkeling, and my 15 minute tread. That last one was pretty heavy, once I got to the last two minutes, where I had to hold both arms out of the water from the elbows up… The only stamina test I have left is the 100 meters timed Tired Diver Tow. 🙂 When I’m done with those, all that remains is actual diving, assisting courses, leading students and leading certified divers, i.e. the fun stuff!

In a couple of hours, I’ll be assisting a really fun one, the Rescue Diver course. It’s gonna be a lot of fun, I’m sure, ’cause doing the course myself was cool, and assisting as a divemaster looked like even more fun. 😀