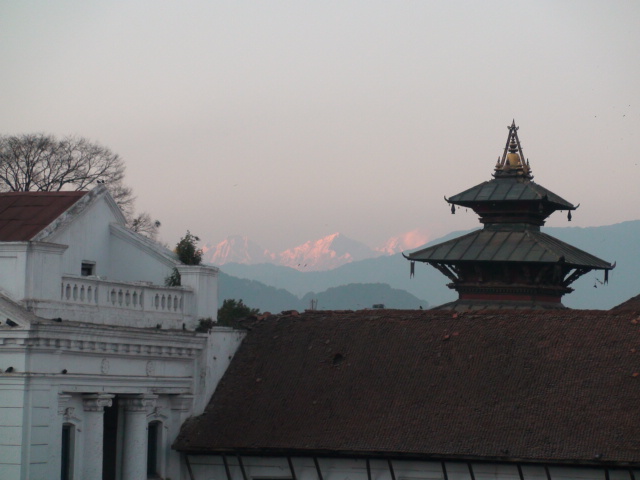 I am sitting on the roof of my hotel, it’s 5:45 pm, the sun has just gone down, and the temperature dropped rapidly. It’s still a lot warmer than the temperatures I’ve had so far on my trip; I have gotten quite far south, but am at rather high elevation.

Yesterday morning we got up and went directly to the border. There we were joined by Marc, the Frenchman from the other day. The crossing went smoothly, and we could see considerable relief on Marc’s face as we’d gotten safely out of Tibet and China, and into Nepal. He is a journalist, and he’s been working on a project to document China’s oppression of Tibet. He was carrying a bag full of camera equipment, and a laptop full of hundreds of pictures of soldiers, police and official buildings in Tibet, and was hence REALLY lucky that the soldier at the x-ray machine looked away from the monitor just as his bags were going through…

The trip from the border to Kathmandu was only about 100 kilometers, but it took five hours… The road was at best only just worthy to call a road, as it snaked along the steep valley out of Himalaya, and at it’s worst the land cruiser was literally climbing over stretches where the road had been reclaimed by the hillside, and all that was left was the rocky landslide, flattened by countless passing motorcycles, cars, lorries and buses with people hanging out of the windows and clinging on to the roofs. As we descended, the temperatures rose and the faces of the people changed from the Tibetan to the subcontinental Nepali, which are darker and more resemble the Indians. Almost everybody speaks English here, and all signs are written in both Nepali and English.

Kathmandu is an absolutely gorgeous city. Walking around down town, I am continuously reminded of the old, narrow alleyways of Rome, and the climate also resembles that of the great old capitol of that ancient empire. The smells are rather different, however. There is an everchanging odour of incense, garbage, food, cow dung, pine trees, and a zillion others that I haven’t the faintest idea how to describe. Walking along the narrow streets, or over the crowded plazas is a continuous assault on the ears. Streets that in every other place I’ve been to would be pedestrian, at least at the busy hours of the day, have cars, bicycles, motorbikes and rickshaws eeking up and down all the time, honking, ringing, whistling and shouting constantly, to make people move out of the way. Last night, and all of today, I’ve just been walking aimlessly around, taking in the city through sight, smell, hearing and especially taste. I really liked the food in Russia, but the food here in Kathmandu has equalled, and sometimes surpassed that cuisine from the northern end of this massive continent.

Tomorrow I am going to stay with a CouchSurfer 15 kilometers from the city centre. He has warned me that his home is not of western standards, most particularly he has no running hot water, but I am accustomed to such minor inconveniences by now, and I’m not letting it stand in the way of getting to know a Nepali family in their own home! My hotel room for tonight is about 1,5 by 2,5 meters, I have a cot to sleep on, a nightstand, a garbage can, and a candle. Electricity comes and goes on a set, but regularly changing schedule, so that every part of the city has electricity 8 hours a day. I’m not sure whether this is because there is not enough energy to power the whole city at the same time, or because the new maoist government is using it to somehow control the inhabitants, but it is just something people here have gotten used to.