Ok, so I haven’t had time to write for a while, so I’ll do a quick update. 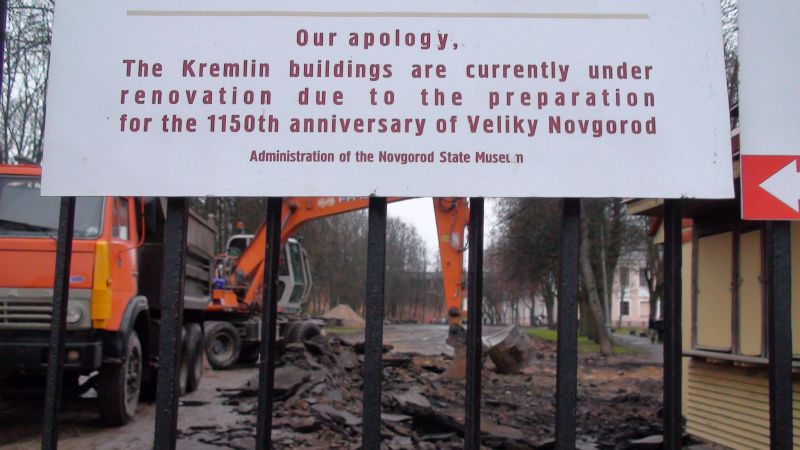 In Novgorod I was hosted by Aleksey and his family, but unfortunately Aleksey was very busy and had to work the whole weekend. On Saturday I spent the day in the centre of Novgorod, which has a beautiful historical Kremlin, or Fort. (The Novgorodians call it Detinets, “Young Men’s Compound) Next year the city will celebrate its 1150th anniversary, so unfortunately everything was undergoing renovations. Still, I got to see a museum with archeological finds from the town, dating back to it’s viking heritage, (it was called Holmgard, the capital of Gardarike), complete with a viking sword and viking dragon broches! It also had an impressive collection of russian icons. 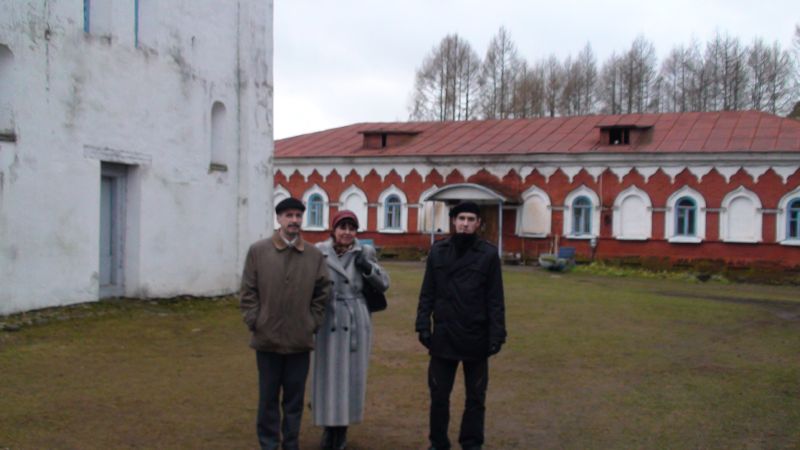 On Sunday, Aleksey drove me and his mother and father out to a small monastery  a place called Peryn, outside the city, dating back to 995 AD. Then he drove us to St.Yuryev Monastery, where he left us because he had to work. His mother works as a tourist guide, and knew very very much about everything we saw that day. Unfortunately, she didn’t speak much English, so there was very little of her knowledge that she managed to communicate to me. Being a guide, she also knew the people at the ticket stands, so we got in everywhere for free! We hitched a ride with a tourist bus from St.Yuryev to the nearby museum of wooden architecture, where I got to try my hand at weaving and spinning, and try some old Russian children’s toys! 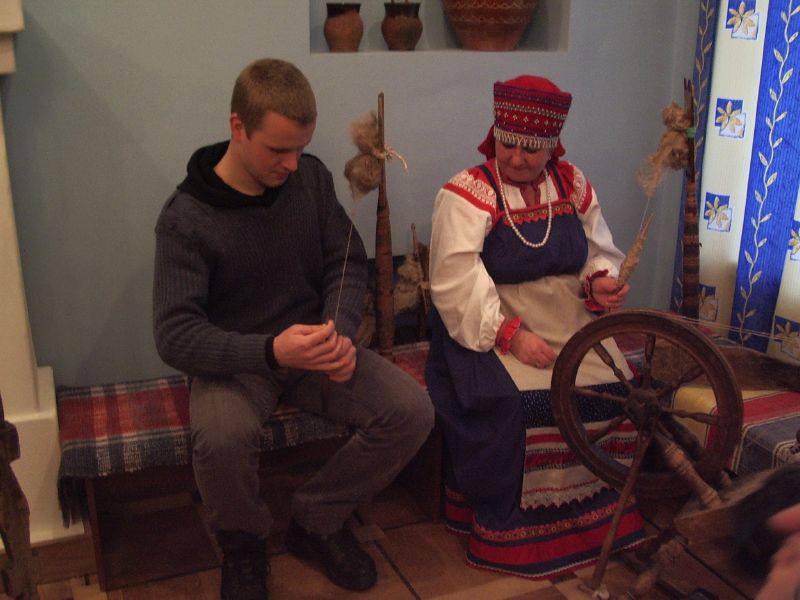 The buildings in that museum were moved from 26 different locations in the Novgorod region, and dated from the 16th to early 20th century. In the museum we also met a Swedish girl, who turned out to be Aleksey’s swedish teacher in university!

After catching a bus back to the centre of Novgorod, we also went back to the museum where I’d been the day before, but this time I got to see the treasury, which had so much gold, silver and jewelry that one could get almost dizzy! Last we went to the St.Sophia cathedral, which is the oldest stone church in Russia, almost 1000 years old, and still standing, still being in use! I’d been there the day before, but this time, with Aleksey’s mother, I got to go to a place that tourist normally can’t get to; up on the choir’s gallery! There were some amazing iconic frescoes, almost as old as the church itself!

Sunday evening I took the night train to Moscow, and I arrived here Monday morning at 5:32am. I was supposed to meet my host, Jimmy, at 7:30, but my phone didn’t work in Moscow, so I couldn’t get hold of him. Eventually, when the shops opened, I managed to get myself a new sim card, but by then Jimmy was at work, he works at the American embassy, and he couldn’t meet me before 5:30pm, which meant that I lugged all my belongings around Moscow the whole day! When I finally met up with him, we also met with Luka from Italy, with whom I’ve been sharing a room the last couple of days.

Soon after we arrived in his apartment, a huge place in a secure area, where many of the foreign ambassadors live, he got an sms about a couchsurfers’ meeting at a Banya, a Russian bath house, that same night. I really needed to relax after carrying all my stuff around all day, so I decided to go. I met some really nice people, and we had a lot of fun. We had a private area all to ourselves, with a pool table, karaoke, two sitting groups, a Turkish steam bath, a Finnish sauna and a cold water pool. One of the girls, Arina, were celebrating her birthday, and there was a lot of vodka and beer going around. After a while some of the guys cooked up a plan to have a strip show as a birthday present for Arina, but I don’t know if she was more flattered or embarrassed… 😛 The only thing that was a little disappointing, was that it wasn’t a REAL Russian banya with the Venik (bunches of birch twigs with the leaves still on), so I’ll have to try again later.  😉

Yesterday I was in good shape, since I’d managed to turn down most of the vodka in the Banya, but I was still too exhausted from carrying around all my stuff, so I stayed in, relaxed, washed some clothes and uploaded some photos and log posts. In the evening I went out to the weekly CS meeting in Moscow, and met some of the people from the banya, and many other couchsurfers. The Moscow CS community is very active!

Today I’m going to go around the centre of Moscow WITHOUT all my luggage, and just enjoy it. I’m meeting up with a couchsurfer I met yesterday, who’s helping me buy a train ticket, seeing as that is apparently one of the most difficult things you can do as a foreigner in Russia…